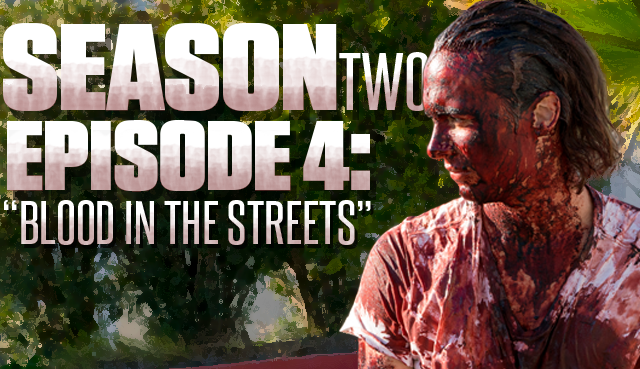 "Blood in the Streets" is the fourth episode of the second season of Fear the Walking Dead. It aired on May 1 2016 on AMC.

Nighttime and Nick swims ashore through the surf towing his clothes behind him in a watertight plastic bag as a helicopter flies by overhead. The sea close to the shore is full of searchlights and the lights of small boats. He gets dressed and makes his way to an abandoned tent camp nearby. He deliberately lures and then puts down an infected man, covering himself in its blood to go incognito.

On The Abigail, Travis and Madison discuss what to do about Strand, they are both troubled by his actions: him cutting Alex and Jake's life-raft loose (in the episode "Ouroboros") . Ofelia and Chris are on the upper deck, trading stories about their past when three people in a raft paddle towards the boat and ask for help. Chris points a hand gun at them but doesn't take charge of the situation and allows them to board. It's two men and a heavily pregnant woman, her legs covered in blood. Chris wakes everyone up and Madison helps the pregnant woman below.

Alicia wakes and sees that Nick is missing, she heads upstairs, goes into the main room and recognizes one of the the men’s voices as belonging to Jack (who she spoke to on the radio in the episode "Monster"). As soon as it's clear Alicia has recognised him, Jack punches Travis and the two intruders quickly overpower the group and hold them at gunpoint. Downstairs in a bathroom, the pregnant woman bangs Madison’s head against the mirror and ties her up. Jack ties the rest of the group up and the second man, Reed, does a little gloating. He remarks that Chris should have shot them when he had the chance. Strand goes for the machine gun in The Wheelhouse and discovers that Daniel has hidden the clip. Reid and Jack look for Strand, having gotten that information out of their captives. There's a raft, rowing noisily away from The Abigail and Reid shoots at the man rowing, puncturing a hole in the raft. We see Strand lying down in the sinking raft and it's not clear if he's been hurt.

In a flashback to 2005 and the aftermath of hurricane Katrina in New Orleans, we see Strand seducing a man at a bar. Strand has lost everything because of Katrina, he is "bankrupt" and has to start again. It's not clear whether he had always planned to steal the man's credit cards, but he certainly does so when he puts the man to bed (drunk) later on. Ofelia tells Jack he shot the man who has the key to the boat, leading Reid to hold Chris at gunpoint until he tells him where the key is really located. Travis reassures him he can start the boat without the keys and he releases Chris. Alicia berates Jack for deceiving her and he tells her he had no choice. He also mentions that their leader, Connor, will sort things out when he gets there. Meanwhile, Nick looks through a nearby town in his disguise as one of the Infected, he imitates the walk of one of the infected as he passes one, but it completely ignores him.

In 2005, Strand, in a hotel bathrobe, is confronted by Thomas Abigail and his associate Luis at his door, the man whose credit cards he stole. It turns out that Strand has put $36,000 on the four cards, mostly with cash advances. He explains he used $30k on debt and real estate but will pay him back with interest. Back to the present, Strand loses his satellite phone in the ocean while Travis attempts to hot-wire the boat. Reid shoves Travis downstairs to start the boat while Madison creates a distraction.

Jack tells Alicia that Connor saved him, so he owes him. Alicia offers to come with Jack in exchange for her family’s protection. He cuts her loose and they seem to have reached an agreement. In the meantime Nick locates the house he was searching for and is confronted at gunpoint by the man from Strand’s flashback (Luis). Things become more relaxed when they introduce themselves and Luis explains he’s going to help Strand cross the border but is puzzled by Nick's reference to “all of us”.

Madison distracts the pregnant woman by suggesting her unborn baby might already have died and turned inside her. On shore Luis explains to Nick as they go to a Zodiac he has hidden and waiting, that his family work for The Abigail family. In another flashback Strand is discussing real estate plans poolside with Thomas. It’s clear they’re romantically involved.

Connor and his friends arrive at The Abigail and take Travis and Alicia away with them, leaving Reid, Red and Ben to take care of the rest of the group. It quickly becomes clear that Reid's going to kill them all, and that he enjoys tormenting them with that first. Nick and Luis get close to The Abigail and quickly realize the hostage situation. From the Zodiac Luis takes out both Red and Ben, Connor’s people, with two perfect head-shots from a small boat, at sea, at a distance of about 200 metres. Impressive marksmanship. This inspires Madison to stab Reid through the abdomen and Chris joins in enthusiastically. Nick hops on board with Luis and explains he’s going to help them get to Mexico. Luis says he only planned on taking Strand to Mexico and Madison tells him Strand escaped before the takeover.

Madison rescues Strand from the water.

Based in part on "FEAR TWD SEASON 2 EPISODE 4: “BLOOD IN THE STREETS” RECAP & DISCUSSION" by Johnny O'Dell[1] 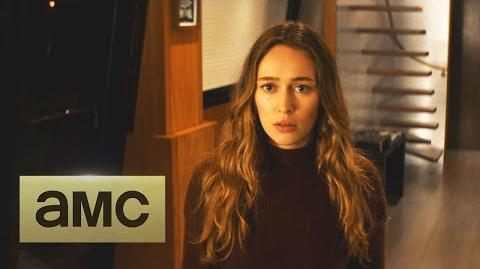 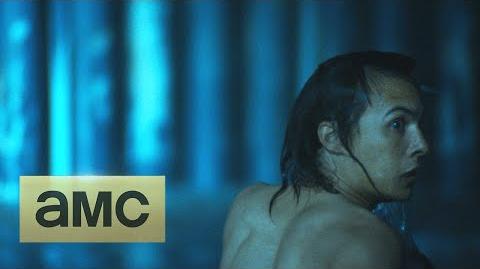 One of the first Season 2 images, from the trailer

Strand with the sinking liferaft

Thomas Abigail and Strand say goodbye as Strand leaves for NY, just before The Fall

Reid threatens to kill Chris while his family are tied up

Strand, by the pool (flashback)

Madison, on her way to rescue Strand

Madison reaches out to rescue Strand

Rothschild made money buying in the panic that followed the Battle of Waterloo against Napoleon. The original quote is believed to be "Buy when there's blood in the streets, even if the blood is your own."[2]

Retrieved from "https://fearthewalkingdead.fandom.com/wiki/Blood_in_the_Streets?oldid=29741"
Community content is available under CC-BY-SA unless otherwise noted.