Alycia-Debnam Carey portrays the role of Alicia Clark in AMC's Fear the Walking Dead'. She is originally from Australia but now lives in the US. (Since 2011)

Debnam-Carey originally trained as a classical percussionist at the Newtown High School of the Performing Arts in Sydney, Australia. In 2010, in partnership with the Berlin Philharmonic, she and a group of about 40 other musicians worked together, composed a piece together in a two week program.

She graduated in 2011 and then traveled to the U.S. for the first time as the youngest cast member in Next Stop Hollywood, a six-part documentary that followed six Australian actors as they competed for roles during the U.S. TV pilot season. Her mother, Leone Carey (a television writer), accompanied her. The documentary aired in 2013 on ABC1 in Australia. 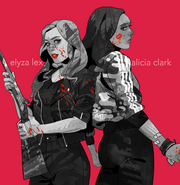 Fan art, showing Alicia Clark and a character from The 100, as she might look in Fear the Walking Dead
Retrieved from "https://fearthewalkingdead.fandom.com/wiki/Alycia_Debnam_Carey?oldid=31700"
Community content is available under CC-BY-SA unless otherwise noted.