'licia, within the Clark family

Alicia Clark, also known as "'licia" within the family, is Madison's daughter and Nick's sister.

So far, Alicia has had one, very dramatic, encounter contact with the undead. That was on the beach in the episode "Ouroboros". She's had very little contact with anyone living who wants to do her harm. The closest she's come so far was in the underground car park when the three deserting soldiers took the SUV Daniel Salazar was driving during the episode "The Good Man".

Before The Fall she was a high achiever. Since things started to go wrong she has been shielded from the worst things by her mother and brother, so she is probably in for a severe shock at the start of Season 2. She may well turn out to be the most successful of Madison and Travis' group, if she survives.

Alicia is an achieving and driven teenage daughter. Before The Fall she went to Paul R. Williams High School; her father died when she was eleven and, like her older brother, this loss has shaped her. Unlike Nick though, she succeeds, she excels in every area of life that he fails in. Alicia plans to go to the University of California at Berkeley and is already in touch with them as well as making plans with her boyfriend Matt Sale.

Main Article: Alicia Clark/Season 1/So Close, Yet So Far
Alicia can't get to see Matt because her brother is ill, in withdrawal from heroin and her mother is off getting drugs for him. She also sees a distressing attack on a neighbour.

Main Article: Alicia Clark/Season 1/The Dog
After being "protected" from the truth by her family, Alicia gets her first idea of what is actually happening, and realises that Matt is probably dead.

Main Article: Alicia Clark/Season 1/Not Fade Away
The Military's routine is infuriatingly normal but things are far from right.

Main Article: Alicia Clark/Season 1/Cobalt
With Chris, she sees evidence that things are changing, the soldiers are looting.

Main Article: Alicia Clark/Season 1/The Good Man
Alicia and Chris have to look after each other while the adults go to find Griselda, Nick & Liza.

"We All Fall Down"

Nick is Alicia's brother and they are described as "two siblings that are very much at odds with each other. They love each other because they are brother and sister, but to a certain extent it’s almost like they are each other’s worst enemies because one is screwing things up while she’s trying to achieve things and get on to college, and the other one is seeing her as this reminder of everything that he can’t be.”[1] Alicia appears to be emotionally distant when it comes to her brother's drug addiction, though she sincerely cares for her older brother and it pains her to see him in such a fragile state.

It is shown that the two share a close connection and that they care for each other. Playfully bantering and being complimentary towards one another. Alicia cares for him without hesitation when he's ill. For his part Matt sends her away, again without hesitation, when he thinks that sending her away is the best thing for her.

Alicia and her mom have a genuinely close and loving relationship. It's strained more so than most teenage daughter and mother relationships mainly over the drama revolving around Nick's drug addiction and Travis moving into their home.

Alicia doesn't appear to have anything against Travis as a person. She resents him being a change in her life and in her relationships with her mother and brother, but she would probably resent any new partner her mother had. In "The Dog"" Alicia is quite anxious when Travis doesn't return and says that it reminds her, in a bad way, of waiting for someone else to return. The unspoken implication is that it reminds her of waiting for her father when he died and didn't return.

Chris is her not-quite-step brother. Alicia seems to initially regard Chris in a similar light to Travis, thanks to the fact that he is a part of the family that's causing great changes in her life. However, it isn't quite on the same level as with Travis. Their first on-screen interaction occurs in "The Dog" when Alicia is running from a walker. Chris helps a panicking Alicia over a fence, but Alicia - in her panic - didn't realize Chris was helping her, and elbows him in the nose, causing it to bleed. The two don't begin to bond until "Cobalt", when they raid the abandoned house of a wealthy family, enjoying their material goods before smashing and tearing the place apart. Romantic undertones can be detected during these moments, especially during one moment when Chris accidentally witnesses Alicia when she was about to change from one expensive dress into another. In "The Good Man", Alicia shares nearly, if not all, of her scenes with Chris. The two end up alone, guarding their car. When soldiers come trying to steal their car, they both get defensive. When one solider makes suggestive remarks and touches Alicia, Chris instantly tries to protect her. His moves ultimate backfire when the soldier knocks him out cold. Alicia and Chris are later seen at the end of the episode hanging out, eating popsicles together. 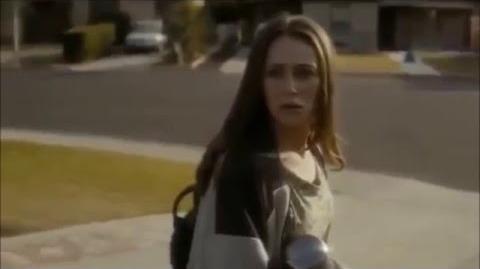 Alicia Clark scenes - Fear The Walking Dead (Season 1)
This looks to be all of Alicia's footage from Season 1 - All of it.

Alicia and the rest of the Clark family.

Alicia and her brother Nick.

Alicia and her brother Nick.

Alicia on the bleachers.

Alicia in the hospital .

Alicia looking out of the window.

Alicia riding her stolen bike in the safe-zone.
Add a photo to this gallery

Retrieved from "https://fearthewalkingdead.fandom.com/wiki/Alicia_Clark?oldid=14494"
Community content is available under CC-BY-SA unless otherwise noted.