The Abandoned Church is a location in Season 1 of AMC's Fear The Walking Dead.

This church served a local community in Los Angeles, California. It was abandoned some time before the outbreak, when it became a drug den.

The church was used as a drug den by Nick Clark and other drug addicts. After a night of drug taking, Nick awakes to find himself alone. He heard a scream and leaves the choir loft, passing the wreckage of the church to find an infected Gloria eating another drug user. Nick then fleas the church.

Later, Travis returns to the church, finding large pools of drying blood and a lone druggie who fleas in terror.

It is unknown what happened to the church after this.

The church was filmed at the Pilgrim Church in the Silver Lake neighborhood of Los Angeles[1]. 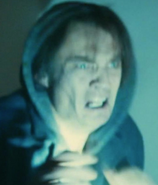 Travis outside the church

Another pages on the Wiki Edit

Retrieved from "https://fearthewalkingdead.fandom.com/wiki/Abandoned_church?oldid=30311"
Community content is available under CC-BY-SA unless otherwise noted.