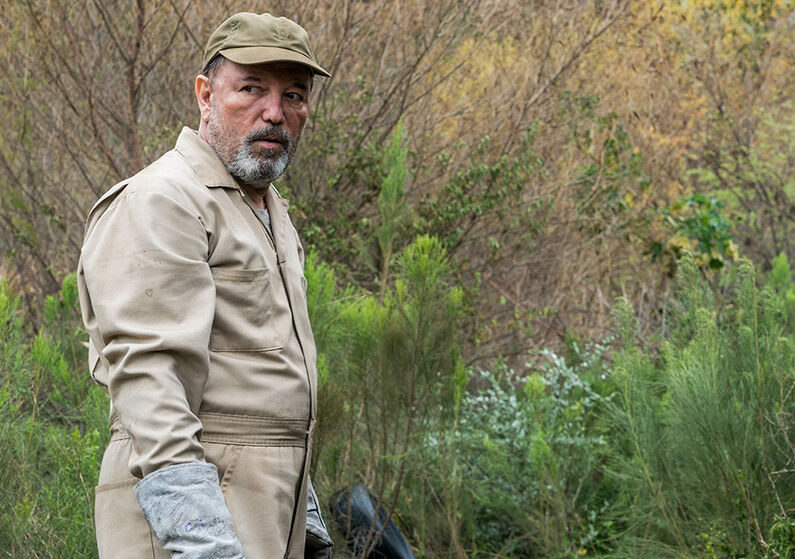 This is the fourth episode of Season 3.

Based on AMC's recap.[2] Please add anything missing and correct anything that's wrong.

Daniel, initially looking like a zombie and covered in burns, hobbles through the streets of Tijuana, skillfully avoiding the Infected. When one of the Infected notices him, he flees and hides under a car. A stray dog barks at the Infected, then runs away. The Infected follows the dog.

Daniel, who has fallen asleep under the car, awakens to the sound of a growling Infected next to the car. A stranger named Efrain kills the Infected then drags Daniel out from under the car. Efrain sees Daniel's charred legs and warns him that he will die if he doesn’t accept his help. He offers to bring Daniel to a water source.

Efrain takes Daniel to a dry water fountain. Daniel is skeptical that the water will come, but at exactly 5 PM, water begins to flow. Daniel laps up the water. Efrain fills a jug and explains that water flows from the fountain at 5 PM every Tuesday.

Efrain loads Daniel into a rickshaw and peddles through town, expertly dodging Infected along the way. Efrain delivers water to a family. They hide as a vehicle of armed men drive by.

Unable to take the pain in his legs, Daniel passes out.

Daniel fades in and out of consciousness as Efrain and his friend, Lola, debate how to treat Daniel’s infected leg.

Daniel awakens as Lola is pulling out a knife, a straight "cut throat" razor - the same as Daniel used . He screams in pain as Lola scrapes off the charred skin with a blade.

After Daniel has had some time to heal, he helps Efrain scavenge for goods. Efrain stops their work to say a prayer before driving a nail into an Infected's skull.

Daniel asks Efrain whether he used to be a priest. "I've been many things. But then I found my true calling," replies Efrain, shaking his flask of alcohol.

Efrain and Daniel eat dinner at Efrain's hideout. Daniel wants to repay Efrain for saving his life. The only thing he can offer Efrain is a proper haircut.

Daniel cuts Efrain's hair and admits that he has killed many people in his life. Efrain asks him how many, and Daniel tells him he's killed 96. He describes escaping the fire at Abigail's estate and confides that he is looking for his daughter, Ofelia. He worries that he may have killed her in the fire. He begs Efrain to be forgiven.

Efrain tells Daniel there's good and bad news. The good news it there's nobody left in the world to judge Daniel for his sins, but Efrain falls asleep before he can tell Daniel the bad news.

Daniel leaves Efrain's home in the middle of the night and forges out into a rain storm. Two Infected attack him and he is nearly overpowered, he is saved when a bolt of lightning strikes the second. Daniel is knocked back, unconscious.

Two dam workers, Pablito and Everardo, discover Daniel while cleaning out rubbish from a sewage pipe. They take Daniel to Lola, who works at the dam. She immediately recognizes Daniel.

Lola explains that municipal president Dante Esquivel took over the dam after Tijuana fell. She hints at her disapproval of his water distribution system.

At the dam, Lola orders Daniel to pretend that he met her when he came begging for work. J.C., Dante's head of security, questions Lola's decision to hire Daniel as a new janitor. She insists she needs more janitors to help keep the water clean.

Daniel and Pablito drag dead bodies out of a sewer. Daniel sees all the people lined up outside the dam exchanging goods for water. Daniel questions Dante's methods.

Daniel eats in the cafeteria. Everyone except Daniel stands as Dante enters the room. J.C. orders Daniel to stand and to look at him when he talks. He sticks his finger in Daniel's food and Daniel stabs J.C.’s hand with a fork without warning, prompting J.C. to pull his gun.

Dante notices the commotion and grills Daniel about his background. After hearing his accent, Dante realizes that Daniel is from El Salvador. He guesses that Daniel is a "sombra negra" member and was in the feared El Salvadoran military. Dante is impressed by Daniel's background and welcomes him as a guest to his table.

In a private meeting, Dante asks for Daniel's help tracking down a water thief. Daniel demands a Jeep in exchange for his help, so that he can search for Ofelia. Dante obliges.

Daniel and J.C. patrol the streets in search of the water thief. As they near Efrain's fountain, Daniel realizes it is almost 5 PM. If they see the water flow from the fountain they will know that it was Lola’s doing. Daniel distracts J.C. from the fountain by directing him to Efrain's hideout.

Daniel tells Lola that he led J.C. to Efrain’s hideout because J.C. was about to discover the fountain. He insists that he was protecting her. Lola lashes out at him for betraying Efrain.

While on patrol, Daniel spots Strand being detained in the water distribution line.

Daniel brings water to Strand in his cell and asks if Ofelia is alive. Strand tells him Ofelia is at the Rosarito Beach Hotel hotel, down the coast. He begs Daniel to help him escape so that they can go to Ofelia but goes too far when he says "She's waiting for you". Daniel doesn't believe him and leaves Strand to rot in the cell.

Daniel finds Dante, crudely interrogating Efrain with his fists. Dante welcomes him and tells Efrain that the expert is now here. He orders Daniel to torture Efrain to reveal the person who helps him steal the water.

Daniel quietly advises Efrain against talking and offers to kill him quickly. He carries on torturing Efrain in the same crude way and commands him to confess. As he prepares to swing a hammer at Efrain, killing him, Lola runs over hugs Efrain, outing herself as his accomplice.

Dante and J.C. take Efrain, Lola, Strand and Pablito to the dam catwalk for execution. Dante pushes Pablito over the edge despite his pleas of innocence.

Lola is next up to be executed and Dante tells Daniel to do it. When Daniel hesitates, Dante orders J.C to intervene. Daniel head-butts J.C., shoots him with his own gun, then kills Dante, begging for his life, and the other guard. This makes 100 people that Daniel has killed.

Daniel asks Lola to be forgiven; he hands over his gun and kneels before her. Lola holds out her hand to Daniel.

The gallery below is automatically generated and contains images in the category "Images from 100". Images added to that category turn up in the gallery after a short time.

Retrieved from "https://fearthewalkingdead.fandom.com/wiki/100?oldid=25898"
Community content is available under CC-BY-SA unless otherwise noted.